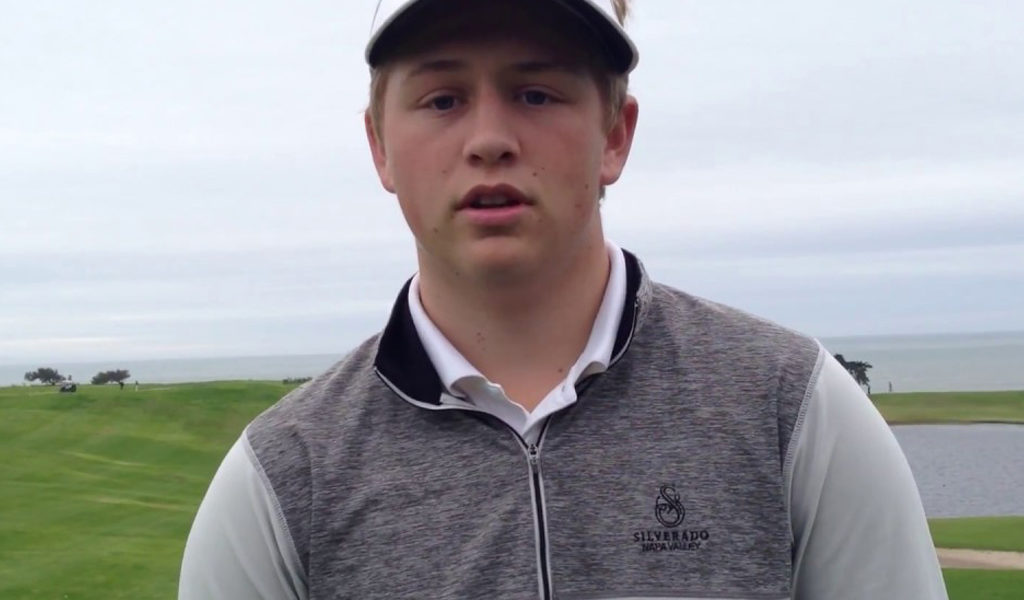 Ryan Grauman of Danville grabbed the first round lead with a 7-under 64 and never looked back, finishing the 72-hole Championship at 9-under 275 to defeat runner-up Matt Heitel by a stroke.

Headed to St. Mary’s University this fall, Grauman’s second big move came via a final round 67 despite strong winds.

jtncApr 23, 2018Comments Off on Strength of Junior GolfOn the Range

There is a growing theme in college and junior golf; going deep! I mean deep, here are some examples:

These kids and college golfers are simply good, and this is not a trend that has just started. Data suggests that in 2016 there where 902 rounds in the 60’s by boys in AJGA tournaments and 626 rounds in the 60’s by girls. In 2017, boys broke par 1698 times, while girls did it 454 times. Even in 2004 numbers where very good and when considering the fewer tournament, work out to averaging approximately the same while still having significant rounds in the middle 60’s and tournaments won with scores under par.

The trend is not only in AJGAs, according to Chris Smeal, founder of Future Champions Golf, “the scores that it takes to compete in junior golf is very low! Last year, we had several scores under 65, including a 62 in our recent FCG Western States Cup and a record -15 under to win the girls division.” Data I have collected examining the Junior Tour of Northern California shows that to win in 2017 the average boys score was 143.48 (2 day) and the average girls score was 146 (2 day). When examining the scores, keep in mind that Perico’s 205 was at the Fazio Course at Carlton Woods which measures 7,358 with a course rating of 75.8 and a slope of 144. Likewise, the Florida Junior Tour at Stone Creek was played at 7,033 yards with a course rating of 73.4 and slope of 125. This means that at points junior golfers are playing at handicaps of +9 or better in tournaments, making the results eerily close to what it takes to play elite amateur and even professional golf.

According to Kevin Smeltz, a top 100 teacher and director of Instruction at Bishops Gate, as well as coach to Julian and Dongjin Park, “at Bishops Gate we have 80+ highly motived students who work to better their game every day. These students not only live right on a world class golf course and practice facility, they also have access to outstanding technology, and a support system which includes experts in fitness and psychology like Dr. Fran Pirozzolo and Ms. Karen Harrison, M.S.”

While the golf is not necessarily better than a decade ago, it is certainly deeper. Youth has more access to tournaments and opportunities to play. According to PGA tour Coach Dan Carharrer “the biggest difference from junior golf when I was a kid vs. now is that US Kids and other organizations have streamline the process allowing kids to build competitive experiences on courses where they have an opportunity to break par. Kids as young as 10 are shooting -10+ to win tournaments, creating a large pool of young golfers who are simply not afraid to shoot way low. With so many great young players, tournaments across the country are seeing low scores.”

For junior golfer, parents and coaches, it is important to make “breaking par” one of the skills that juniors learn and practice as part of their development. For many this process will begin on their home golf course and can start with the junior playing the course from as short as 5200 yards. The key is the junior learns to leverage their strengths to make birdies, as well as feel comfortable as possible with shooting scores that start with the number “6” and as they improve their skills, even start to think about scores which start with “5”.

In this month’s article, I would like to address the issue of early commitments. As many of the readers might be aware, Brad Dalke, a member of the 2017 NCAA Championship team at the University of Oklahoma Golf committed when he was 12 years old. Since that time, many more young men and women are committing early with players like Ben James (2021) committed to UConn and Hudson Weibel (2021) to Oklahoma. As this becomes more common, I wanted to explore the reasons it is happening, as well as the thoughts of eminent scientists about the phenomena.

A key aspect of early commitments is about the information available to people on sites like National Junior Golf Score Board and AJGA. These sites, which list college signees, only cover those which sign a National Letter of Intent; that is the player gets a scholarship. Scholarship players likely only make up less than half of all that play college golf, therefore the numbers for these players leave a poor anchor for players, families and coaches.

It is also important to remember that Letters of Intent can be offered two times per year. The first time is a 10-day window in November, when coaches are done the fall season and have the time to report results to outlets like NJGS or AJGA. The other window is in the spring, after April 1, when coaches are in the middle of exams and conference or regional tournaments. This makes it more likely they will not report the results.

Players, parents and coaches should also consider the long-term impact of the decision. According to Dr. Fran Piozzolo, a PhD and mental trainer for Northwestern University and Bishop’s Gate Golf Academy the decision one makes about where he or she will go to college is a very complicated and important decision that most 18 year-old high school athletes are not fully prepared to make. “The phenomenon of even younger student-athletes, some as young as 11 or 12, participating in recruiting activities, is troubling from several perspectives. Even the most mature and intellectually gifted young people cannot possibly be expected to make good decisions for themselves, with or without the assistance of parents and other advisors”. His comments are based on his own research which demonstrates the development of exceptionally talented athletes follows no predictable algorithm (Pirozzolo & Bjork, 2017), instead the research found “the myth that young prodigies have a gift that spans across many performance domains is just not supported by scientific data. Research strongly supports the assumption that gifted athletic prowess has more to do with the family than any other single factor in the development of exceptional talent (Bloom, 1985)”.

Dr. David Grecic, the chair of Sport at the University of Central Lancashire in the United Kingdom agrees with many point of Dr. Piozzolo, suggesting “the focus on early specialization in golf and its resultant practices is a worrying development. Youngsters and parents alike are being given the impression that adult level skills are required at younger and younger ages or they will be excluded from golf’s talent pathway.  This focus is transmitted from and to high schools, colleges and even management companies who are now exerting unwelcome and unmerited pressure on young golfers without understanding the true nature of the potential elite performer’s individualized developmental pathway. Indeed, unless we have a crystal ball and can see into the future many of the decisions made by recruiters to predict success are ill conceived and are not helpful in supporting youngsters who love the game”.

Brendan Ryan, a former college golf coach who writes extensively on junior and college golf suggests “players, under the supervision of their parents and coaches, need to own the process and understand they are on a unique journey that is not about checking boxes, but building developmental assets which will prepare them to lead healthy adult lives”. The issue, according to Brendan is that players and parents are too worried about aspects of the school that are not important, instead his advice is: ‘the only thing young people need to consider is how the school can help the student transform during their adolescence years into a healthy, happy adult”.

The fact is, in the US, there are lots of amazing universities that combine the opportunity to earn a degree, while playing competitive college golf. With so many amazing options, students should not be a hurry but instead work through to find a place where they will have the best opportunity to grow academically, socially and financially. 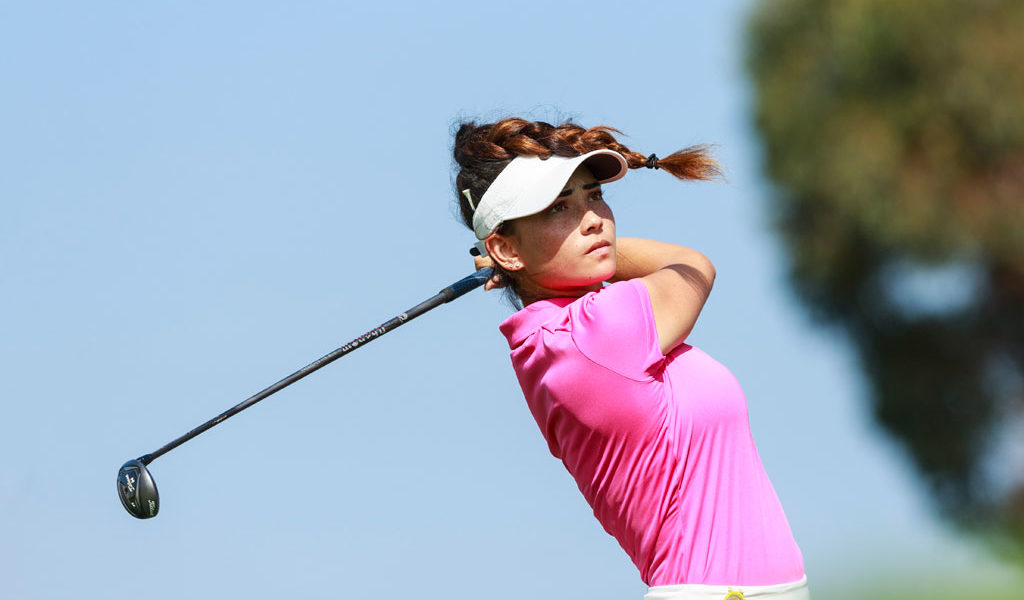 The winner of the 2013 NCGA Junior Championship, Hutchison was also named to the All-Big West First Team.

“I can’t say enough about how supportive coach (Anna) Temple, my family and my teammates were in my journey this season,” Hutchison told The Enterprise. “They were so encouraging and really brought out the best in me.”

One of Hutchison’s Aggies teammates is sophomore Yoonhee Kim, who won nine times on the Junior Tour. Hutchison’s brother, Thomas, who plays on the UC Davis men’s squad, was the JTNC Boys’ Player of the Year in 2016.