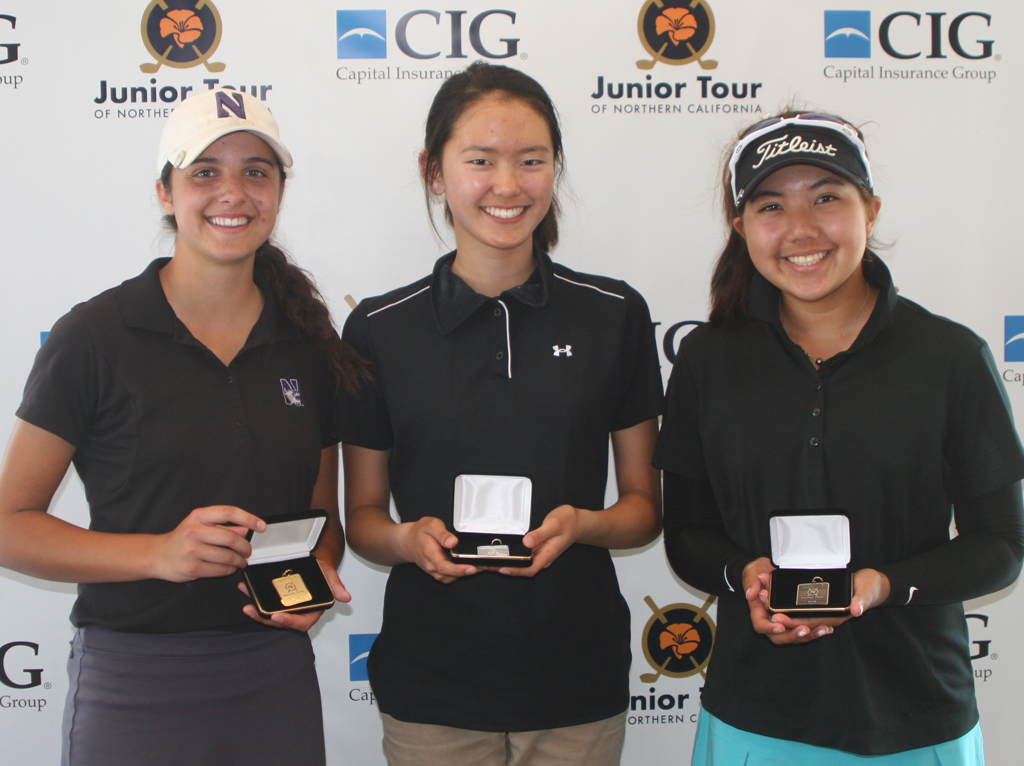 Alamo resident Ryan Grauman shot 4-under 139 and Manteca resident Brooke Riley shot 5-over 148 to win their respective divisions at the Summer Series I Championship held Saturday and Sunday at par-71 Elkhorn GC and par-72 Reserve at Spanos Park. Grauman picked up his third win of the 2015-2016 season thanks to a steady first round 73 and a stellar final round 66.  In winning for the third time in the season, Grauman matched the JTNC Boys’ record for most wins in a season. The record is now held by four players, and was recently tied by San Jose’s Thomas Hutchison.

A day after carding a wild 73 featuring an eagle and three birdies but also three bogeys and a pair of double-bogeys, Grauman found his groove. On Sunday at Reserve at Spanos Park, he’d open with a bogey but then ran off seven birdies and 10 pars to defeat runner-up Trey Davis of Olivehurst by a stroke. The clincher for Grauman was a birdie on the 17th.

Davis, who grabbed the first round lead with a 70 at Elkhorn GC, had five birdies in Sunday’s final round. He’d also be stung by a bogey and double-bogey, however which led to another round of 70 and two-day total of 140.

Third place went to Danville’s Mackade Mangels at 143 following a final round 69. Mangels had the shot of the weekend, acing the par-3 13th hole at Elkhorn GC on Saturday.

Brian Ma of Milpitas was fourth at 145 after a 72, while Aditya Kumar of Fremont and Daniel Kim of San Jose shared fifth place at 146 following rounds of 72. In the Girls’ Championship, Riley notched her first win of the 2015-2016 season by going wire-to-wire.

In Saturday’s first round at Elkhorn GC, Riley had a shaky 76 that featured three birdies and eight bogeys. A day later, Riley played her first three holes at 2-over after making double-bogey on No.3. She’d bounce back, however, by playing her final 15 holes at 1-under par for a 72.

Fourth place went to San Ramon’s Danielle Suh at 153 after a 76. Yoonhee Kim of San Ramon and Alamo’s Annika Borrelli tied for fifth at 154 after final rounds of 77. In the Boys’ First Flight Championship, Caleb Barstad of Carmel Valley shot rounds of 73-72 to finish at 145 and claim a 10 stroke victory.

Second place went to Folsom’s Christian Castillo at 155 after a 74. Nathan Wang of Fremont was third at 156 following a 78.

Jason Deaver of Redding took fourth at 160 after an 81 and Shreyvas Narayanan was fifth at 161 following an 82. In the Girls’ First Flight Championship, Selena Tang of Fremont made par on the 18th hole to shoot 75 and finish at 151, claiming a one-shot victory over runner-ups Adora JiaYi Wen of Dublin and Cynthia Zhang of Milpitas. Wen had a chance to force a playoff with Tang but bogeyed the 18th to finish with a 74 and two-day total of 152. Zhang also had a shot at forcing extra holes but also bogeyed the 18th for a 76 and 152.

In a card-off, Zhang was awarded second place. Fourth place went to Pleasanton’s Rachel Shaw at 156 after an 87. Erica Lam of San Jose was fifth at 158 following an 80. In Saturday’s opening round, Shaw had posted a sensational 69 that included five birdies and two pars.

Next up on the JTNC calendar is the Summer Series II Championship, slated for June 15-16 at Poppy Ridge Golf Course in Livermore.