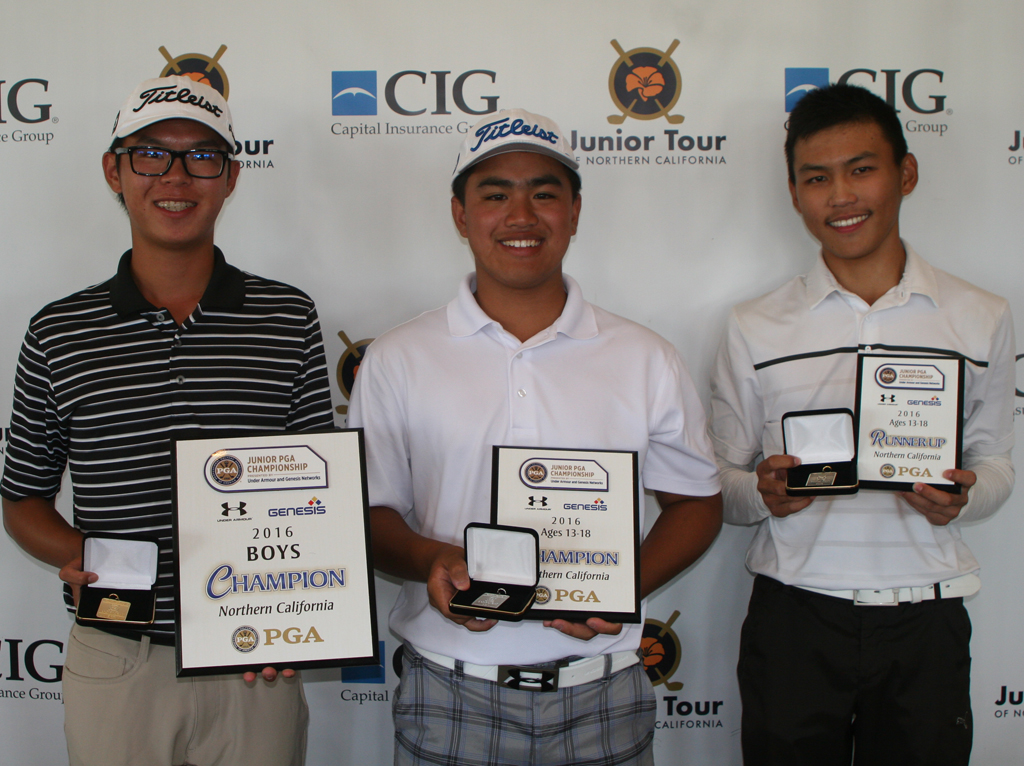 Hy picked up his first win of the 2015-2016 season in dramatic fashion, making birdie on the 18th in the final round for a round of even-par 72. Just a hole earlier on the 17th, he’d suffered a crucial bogey. The birdie on 18 gave him a one-shot victory over both Jeremy Villafuerte of Newark and San Ramon’s Isaiah Choi.

Hy had been close to winning before. At both the Fall Series VI and Spring Series VII Championships, he placed second.

Villafuerte, who was coming off a 77 in Wednesday’s wind-swept first round, carded a birdie on No.12 to get to a total of 4-over but could only manage pars on his final six holes.

Choi had a chance to catch Hy but stumbled with bogeys on the 16th and 17th holes for a second round 72. In a card-off, Villafuerte was awarded second place, with Choi placing third. In the Girls’ Championship, Noh was the epitome of steady, carding 12 straight pars in the final round for a 73 and one shot win over Danville’s Ty Akabane and Brooke Riley of Manteca.

For Noh, the win was her ninth career JTNC title, moving her to third place on the Girls’ all-time career win list. The victory was also Noh’s third of the 2015-2016, tying her with Casie Cathrea for third place three) for most wins in a season.

In a card-off, Akabane was awarded second place, with Riley placing third.

Belinda Hu and Yoonhee Kim of San Ramon both finished T-4 at 154 after final rounds of 73 and 76, respectively. In the Boys’ First Flight Championship, Tyson Rutledge of Clovis had rounds of 75-72 to finish at 147, claiming a three shot win over Alamo’s Cameron Keith.

Rutledge was solid in the finale, carding an eagle and birdie to go against three bogeys.

Keith had rounds of 76-74. Nicholas Dolley of El Dorado Hills and Nathan Wang of Fremont both tied for third at 151 after final rounds of 72 and 74, respectively. In the Girls’ First Flight Championship, Palo Alto’s Katherine Sung had a final round 74 to come in at 156 for a seven-shot win. Both Jasmine Chen of Pleasanton and Cynthia Zhang of Milpitas finished tied for second at 163 after final rounds of 77 and 78, respectively.

In a card-off, Zhang was awarded was second place with Chen placing third.

Madison Starke of Walnut Creek was fourth at 166, with Liam Sklar of Los Gatos taking fifth at 167.

Next up on the JTNC calendar is the Summer Series III Championship, slated for June 20-21 at Coyote Creek Golf Course in San Jose.