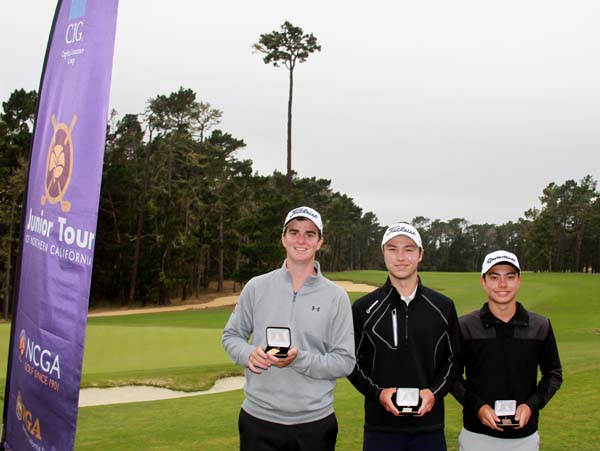 Burnett got his first win of the season, coming from behind with a stellar final round score of 68 to tie Carper after regulation. In the sudden-death playoff, Burnett won with a par on the first hole (No.1).

Having started the day five behind Carper, Burnett began with a ho-hum 1-over 37 on the front-nine. On the back-nine, he’d catch fire, carding four birdies with no bogeys for a 31. A clutch birdie on the par-5 18th got him into a tie with Carper.

Carper, who’d opened with a 69, was unable to get anything going. He’d card a 73, posting two birdies to go with four bogeys.  Three of Carper’s bogeys came within his final six holes.

San Jose’s Thomas Hutchison, who was looking for a record fourth win of the season, finished tied for third at 143 along with Reno’s Charles Osborne. Hutchison, winner of the recent NCGA Junior Championship, had a final round 71, while Osborne shot 73. Hutchison was awarded third place after a card-off. In the Girls’ Championship, Iqbal picked up her fourth win of the season with a dominating performance.

Iqbal’s total of 8-under 67 tied the JTNC record for second-lowest winning score. The record is 11-under held by former junior sensation Casie Cathrea.

San Ramon resident Yoonhee Kim, who came into the event with six wins this season, and Cupertino’s Bibilani Liu finished tied for second at 149 after rounds of 72 and 73, respectively. Kim, who played in her final JTNC event before heading to UC Davis, was awarded second place via a card-off.

Doodle Yuen of Los Gatos and Tzu-Yi Chang of Morgan finished T-4 at 150 following rounds of 76 and 77, respectively. Nathan Wang of Fremont was third at 158 following a 76. Livermore’s Darrell Oneill was fourth at 162 after a 78 and Alexander Iniakov was fifth at 163 after an 80. In the Girls’ First Flight Championship, San Ramon’s Steffi Lin had a final round 81 to come in at 163, defeating runner-up Adora Liu of Fremont by a stroke. Liu shot a final round 81.

Cynthia Zhang of Milpitas was third at 67 after an 86. Madison Wu of Dublin and Cupertino’s Samira Pal finished T-4 at 169 after rounds of 84 and 85, respectively.

The Tour Championship concluded the 2015-2016 JTNC season. Next up on the calendar is the 2016-2017 Fall Series I Championship, to be held August 20-21 at Cypress Lake Golf Club in Vacaville.

San Jose resident Lucas Carper jumped into the lead, posting a solid 2-under 69 that included a hole-in-one on the par-3 2nd hole.

Carper, who’s looking for his first win of the season, aced No.2 and added an eagle on the par-5 9th to go with three birdies and five birdies, giving him a one-shot lead over Reno’s Charles Osborne.

Osborne had a steady day, carding three birdies to go against two bogeys.

Six players, including Palo Alto resident Ahmed Ali, are tied for third at 71. Ali. along with San Jose’s Thomas Hutchison and Alamo’s Ryan Grauman, is looking for his fourth win of the 2015-2016 season, which would set a new JTNC record.

Hutchison, who came into the championship, leading in the points race for Boys’ Player of the Year, opened with a 72. Grauman shot a 75.

San Jose resident Sabrina Iqbal, the reigning two-time JTNC Girls’ Player of the Year, grabbed the early lead by posting a solid 4-under 67.

In second place at 73 is Tzu-Yi Chang of Morgan Hill at 73. Both Doodle Yuen of Los Gatos and Elizabeth Scholtes of Alameda are T-3 at 74.

San Ramon’s Yoonhee Kim, whose won six JTNC events this season (the second most all-time), opened with a 77.

Krishan Patel and Steven Chen, both of San Jose, are tied at the top of the leaderboard after posting matching scores of 78.

Howard Shu of Saratoga and Michael Lozano of Manteca are T-3 at 81.

Milpitas resident Cynthia Zhang took the lead in round one, opening with an 81.

In second place is San Ramon’s Steffi Lin at 82. Both Sydney and Lauren Sung of Palo Alto are T-3 at 83 along with Adora Liu of Fremont.