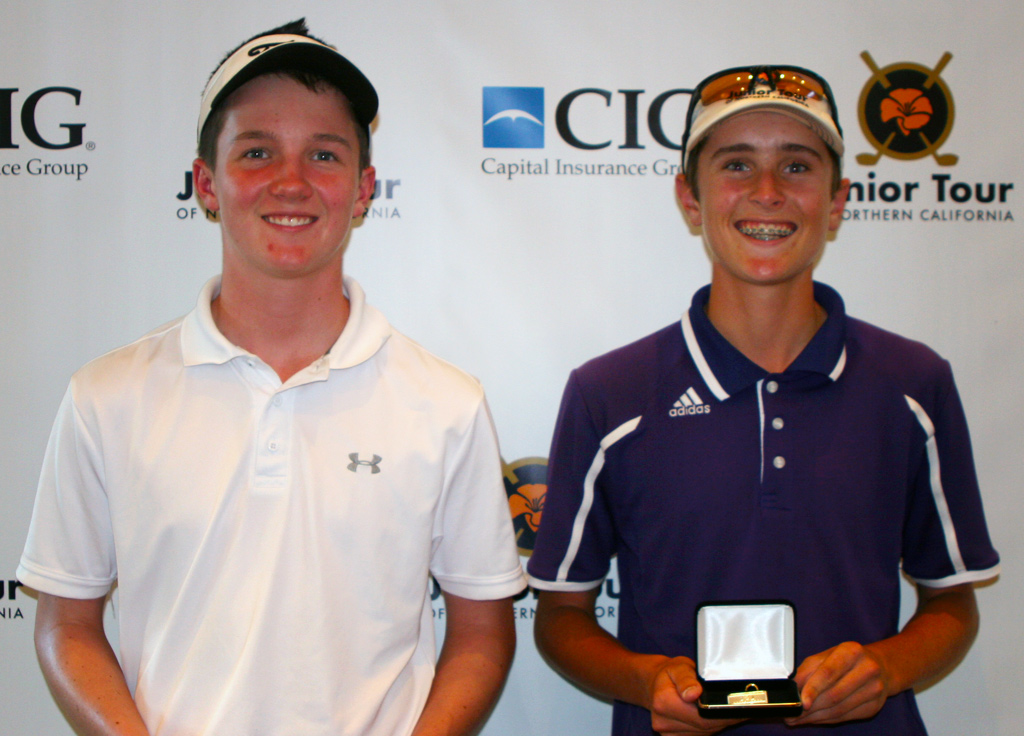 Woolsey picked up his first win of the 2014-2015 JTNC season in dramatic fashion, carding birdies on the 17th and 18th holes to knock off runner-up Ryan Knop of Pleasanton by a stroke. 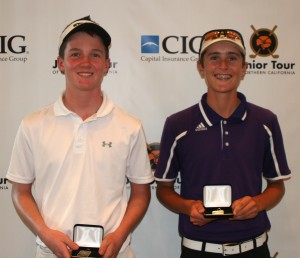 Tied with Knop at 3-under par 67 after Monday’s first round on the Hill Course, the two would end up dueling for the title. Through the front-nine of the second round, Woolsey and Knop would remain knotted up at a total of 1-under par after both carded scores opening nine scores of 2-over 38.

On the pivotal back-nine, the two still see-sawed early on as both carded two early bogeys to remain tied at 1-over par through 13 holes. Knop eventually grabbed a one-stroke lead with a birdie on the par-3 14th, and remained a stroke ahead after the duo traded birdies on the 17th hole.

The difference maker came on the Valley Course’s 358-yard, par-4 18th, where Woolsey made birdie and Knop made bogey, an instant two-shot swing.

Also in the hunt following Monday’s first round were Pleasanton’s Raj Chekuri and Connor Motherway of Reno. The two ended the day just two shots off the lead after carding identical 69’s.

Joining Chekuri in the tie for fourth were Fremont resident Louie Chen, who had rounds of 73-73, and Aaron Chen, who shot rounds of 71-75.

The Girls’ Championship also came down to the wire.

There, Noh and Bencia resident Kathleen Scavo finished regulation tied with scores of 10-over 152. Noh would win the title after defeating Scavo in what became a two-hole sudden death playoff. 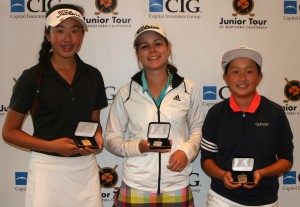 Noh, who also won the Spring Series I Championship, had grabbed a share of the first round lead with Danielle Suh of San Ramon after the two posted opening scores of 3-over 73. Scavo, who recently qualified for the upcoming U.S. Women’s Amateur Four-Ball Championship with partner Lucy Li, was two behind the co-leaders following a 75.

In the final round on the Valley Course, Noh carded seven bogeys for a 79. Scavo forged the tie by posting a 77 that featured four bogeys and a double-bogey but also a crucial birdie on the par-5 10th. Scavo , who’s headed to the University of Oregon this fall, would make par on each of her final eight holes.

Suh had a final round 81 to finish alone in third at 154. Sisters Amanjoty Sangha and Kiran Sangha of San Mateo finished in fourth and place, respectively, with total scores of 156 and 160.

The finish was also tight in the Girls’ First Flight Championship, with Borina Sutikto of Fremont holding off runner-up Lauren Shew of San Francisco by two strokes.

The first round leader after a solid 75 on the Hills Course, Shew slipped back with an 82 in the second round to finish at 157. Sutikto, on the other hand, followed up an opening 79 with an even better 76. Clinching the title for Sutikto was a great run on holes No.13 through No.16, where she’d go 2-under thanks to three birdies. 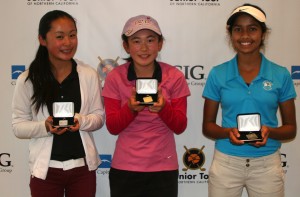 Finishing in a tie for third in the Girls’ First Flight at 164 were Divya Tadimeti of Palo Alto and Megan Yang of Saratoga. 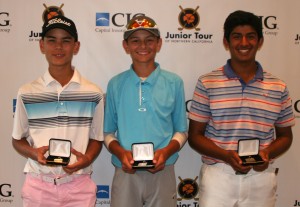 In the Boys’ First Flight Championship, San Ramon’s Jack Gardner didn’t allow any drama. Gardner came out firing on all cylinders, posting a stellar opening round 1-over 71 that featured four straight birdies on holes No.15 through No.18. He’d shoot a 79 in the second round to come in at 150, defeating runner-up Nick McClendon of Livermore by five strokes.

McClendon had rounds of 80-75, while third place finisher Shaan Gagneja of Cupertino finished at 158 after rounds of 79-79.