In picking up his first win of the season, Menconi had to fend off a number of challengers. 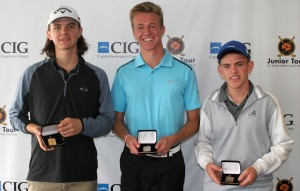 Following Saturday’s first round, Menconi was tied for the lead with Fresno’s Bryce Loosigian at even-par 71. During their rounds, Menconi and Loosigian both were steady, posting three birdies with three bogeys.

It was during Sunday’s finale that things really tightened up.

Loosigian, meanwhile, fell back into a tie for second at 4-over 145 after carding a 74 that featured two birdies but also three bogeys and a critical double-bogey on the par-4 13th.

Arroyo Grande resident Jeff Carr, meanwhile, who had opened with a 73, tried to make a Sunday charge after opening with a birdie on the 1st. His run wouldn’t last though, as Carr went on to card six bogeys to go with just four birdies the rest of the way for a 72 and two-day total of 145.

In a card-off, Carr would be awarded second place due to having a better back-nine than Loosigian, who placed third.

While Menconi, Carr and Loosigian jockeyed for position, San Mateo resident Carter Walling tried to stage a major comeback. A day after opening with a 7-over 78, Walling caught fire, posting a tourney low 3-under 68 that included three birdies, an eagle on the par-5 14th and just two bogeys. From holes No.6 through the 18th, Walling went 4-under but it wasn’t enough, as he’d finish in a three-way tie for fourth at 5-over 146 with Alexander Chin and Jack Avrit. 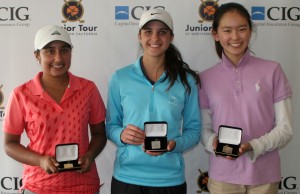 In the Girls’ Championship Flight, Sangha put an end to any potential drama with a stellar final round 71 for a five-stroke victory over Manteca’s Brooke Riley and her second win of the season.

Like the Boys’ Championship, the title was up in the air after Saturday’s first round as both Sangha and Riley came in with matching scores of 74.

On Sunday, however, Sangha went into another gear. While the Fall Series III Championship winner had five bogeys, she’d also post five birdies, including three on her last five holes (No.5, 6 and 9) on the front-nine.

Riley, meanwhile, couldn’t recover from a slow start. Despite following up a bogey on No.3 with a birdie on the 5th, Riley went on to bogey No.6 and double-bogey the 7th for a front-nine score of 3-over 38. On her back-nine, she’d go 2-over with three bogeys and a bogey to finish with a 76 and two-day total of 150.

Belinda Hu of San Ramon, who won the Fall Series V Championship in September, had been in the mix following a first round 76 but shot a second round 75 to land in third place at 9-over 151.

In the Boys’ First Flight Championship, Arroyo Grande resident Owen Avrit shot a final round 77 to finish at 155 and defeat runner-up Kevin Stebbins of Exeter by two strokes. 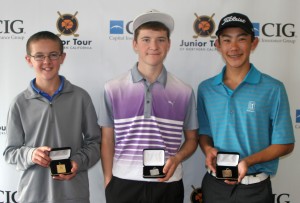 Stebbins was just a stroke behind Avrit following a par on the 16th, but he’d bogey the 17th to fall two shots off the lead. Avrit was steady when it counted, carding pars on holes No.12 through the 18th.

Finishing in third place in the Boys’ First Flight was San Ramon’s Nikko Lee, who came in at 158 after rounds of 82-76.

In the Girls’ First Flight Championship, Kaleiya Romero of San Jose had a final round 81 to win by two over Corine Tan and Borina Sutikto.

In a card-off, Tan was awarded second place due to having a better back-nine (3-over to 4-over). 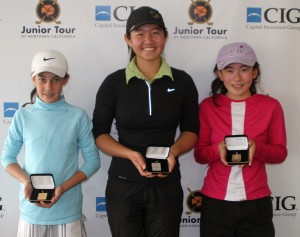